In conversing with people about our trip, I’ve noticed a certain unrealistic, false perception of what long-term travel is about. People have called our trip “a year off” or “a vacation;” “I’m jealous” has been a frequent comment, as well.

Attempting to dispel the romantic notions of long-term travel (not to whine, mind you), writers across the travel blogosphere occasionally highlight the negative aspects of travel (see examples from Nomadic Matt, Goats on the Road, Art of Adventuring, and So Many Places).

Traveling isn’t all rose-and-lavender sunsets, amazing street food, and horizon-expanding adventures. In fact, traveling long-term can be a real pain the ass, sometimes all too literally. It isn’t an accident, as Pico Iyer has pointed out, that the words travel and travail have the same root.

Let’s take a tour of the dark side of traveling.

Traveling is a pain

Take a 12-hour overnight bus ride across Bolivian high plains on unpaved roads, with no heat or an onboard restroom. Sleep on a lumpy mattress on the floor of a bamboo hut on the coast of Thailand while inches-long jungle insects crawl across the bathroom walls. Walk through the soupy air of Havana feeling sweat gush from crevices you didn’t know existed on your body. The trip introduced me to a host of physical discomforts. Transportation was just the most obvious one. Sometimes even staying in one place was tough. Every new bed required adjustment. Every new cuisine challenged my guts. I only got sick three times on the trip (in Holland and twice in Peru) but on each occasion my body was being turned inside out and I just about had enough of being on the road.

My mind experienced discomforts on the road, too.

At home-home in Portland, Oregon, or Košice, Slovakia, everything is familiar: I know places and how to get there, I speak the language, I recognize people and can anticipate their behaviors.

On the road every day I had to figure something else out, learn a lesson, adjust. Every new currency taxed my math skills. Every new language tested my memory. Every new city demanded I learn its layout and how to get around (I’d never felt as disoriented as when, in the Southern Hemisphere, the noon sun hung in the north). Every new culture begs to be discovered, digested, processed, adjusted to. My brain worked overtime to process all the information—the sights, the smells, the tastes, the sounds, the sheer there-ness of everything—coming my way.

While experiencing new places and cultures is part of why I travel, I was also constantly out of my element, outside my comfort zone. Looks like bliss. Is a rest. On a field of salt. Salar de Uyuni, Bolivia.

I often managed to discount discomforts as an indelible part of travel or even to dismiss them as the price to pay for the journey. But eventually the disrupted sleeping patterns, overworked digestive tract, and overstimulated senses always added up and caught up with me. Whether you call it travel fatigue or burnout exhaustion is a prominent resident of the dark side of traveling.

Mental discomforts of traveling are a matter of perception and, with some experience, relatively easy to handle. Moral considerations are on a whole another level.

In many places, including Istanbul, Arequipa, Cusco, and Havana, I felt like a walking dollar sign. I had to shield myself from tout ambushes, ward off beggars (often children), or steel myself against scammers. Being a target of this sort went beyond discomfort.

I won’t dispute the disparity between even my modest travel budget and incomes of people in developing countries. But to be targeted for the money I used for the trip that I earned it with years of hard work felt discomfiting. While touts, beggars, and scammers are relatively easy to defend against mentally, witnessing poverty first hand truly affects the soul.

My home country, Slovakia, ranks 41st among countries by GDP per capita, and 42nd on UN’s Human Development Index, whereas my adopted country, the U.S., ranks 6th and 8th, respectively. That isn’t to say I have not seen poverty in either country but on the trip I witnessed extremes of my experience (and I didn’t even go to India or African countries).

One method of dealing with the disparity is to think, as I’ve heard expressed numerous times, that “they may be poor but they’re content.” This line of thinking is problematic because it would relieve me from the responsibility to act and perpetuates the status quo. The stance I adopt is

While this relieves some of the soul-hurt, it still sometimes feels like a cop-out. The truth is, some amount of soul-hurt is part and parcel of traveling. The furthest reaches of the dark side of traveling are just part of the landscape.

“No man is an island,” wrote John Donne, and though he was right, traveling gets lonely after a while. I traveled with the best travel partner possible, Lindsay, yet still there were occasions when I felt isolated and forlorn, indeed like an island (the worse was to feel like an island when I was on an actual island). This had nothing to do with Lindsay and everything to do with me and the vagaries of long-term travel.

Gallivanting around the world, I was, by definition, away from the people I knew: family and friends. I felt, as the song goes, “like a motherless child, long way from home.”

Many times while traveling I felt uprooted. This was different than the uprootedness I had experienced as an immigrant: as a newcomer to the U.S., I was settling down in a single place. On the road it always took a while to get accustomed to a new place. A new city would take several days, if not weeks, to begin feeling like home. Yet I never got to enjoy the new home for long because soon I was moving to the next one. 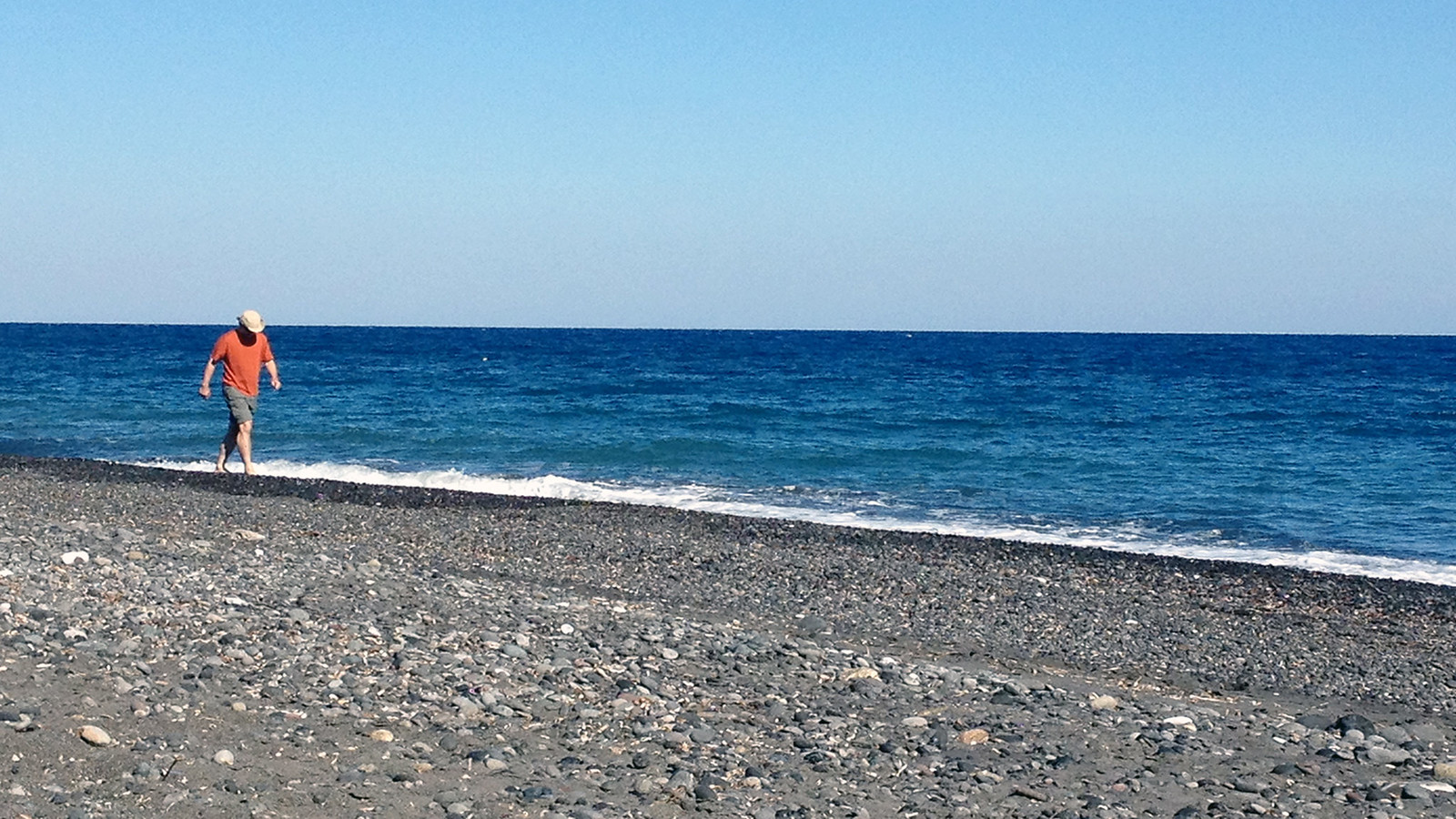 Walking on the edge of a volcano, Kamari Beach, Santorini, Greece.

Traveling as a couple helped mitigate loneliness. It was amazing to give and get support to one another, especially in tough situations like sickness or difficult adjustments.

But there’s a reason so many travelers find themselves on the road.

Not having a day job, not having to to commute or work around the house, opened for me a vast new space for musing and contemplation, about the world and my life in it. And I had to do all that thinking alone. Sometimes the things I found weren’t pretty; once again I was on my own dealing with that.

Nothing could have ever brought me to myself as much as travel did, driving home the point I am with me all the time, with fewer distractions (e.g. work) to prevent me from denial or from avoiding to deal with issues.

Many people travel to find new friends. As an introvert, I don’t make friends easily. As a realist, I recognize that most human contact with other travelers is fleeting and superficial. To be sure, I did make friends on this trip. But no matter how many people I spoke with or even befriended, in the end, when it was time to say goodbye, I was on my own again.

A friend I met on my travels once told me about the ABC Syndrome. He could no longer visit churches because they gave him the Another Bloody Church affliction (temple burnout falls into the same category).

The syndrome goes well beyond houses of worship. On previous trips as well as on this recent one, I saw so many churches, temples, markets, cemeteries, forests, mountains, and so on, they all started to blend in.

The natural solution would be to revel in every place, not in comparison with others experienced before it, but rather in and of itself. In some moments, though, I felt as though my experience in the moment fell flat. Thus emotionally flattened, I’d seek the next thing to rekindle the profound awe I had felt when staring in the face of sheer beauty for the first time. 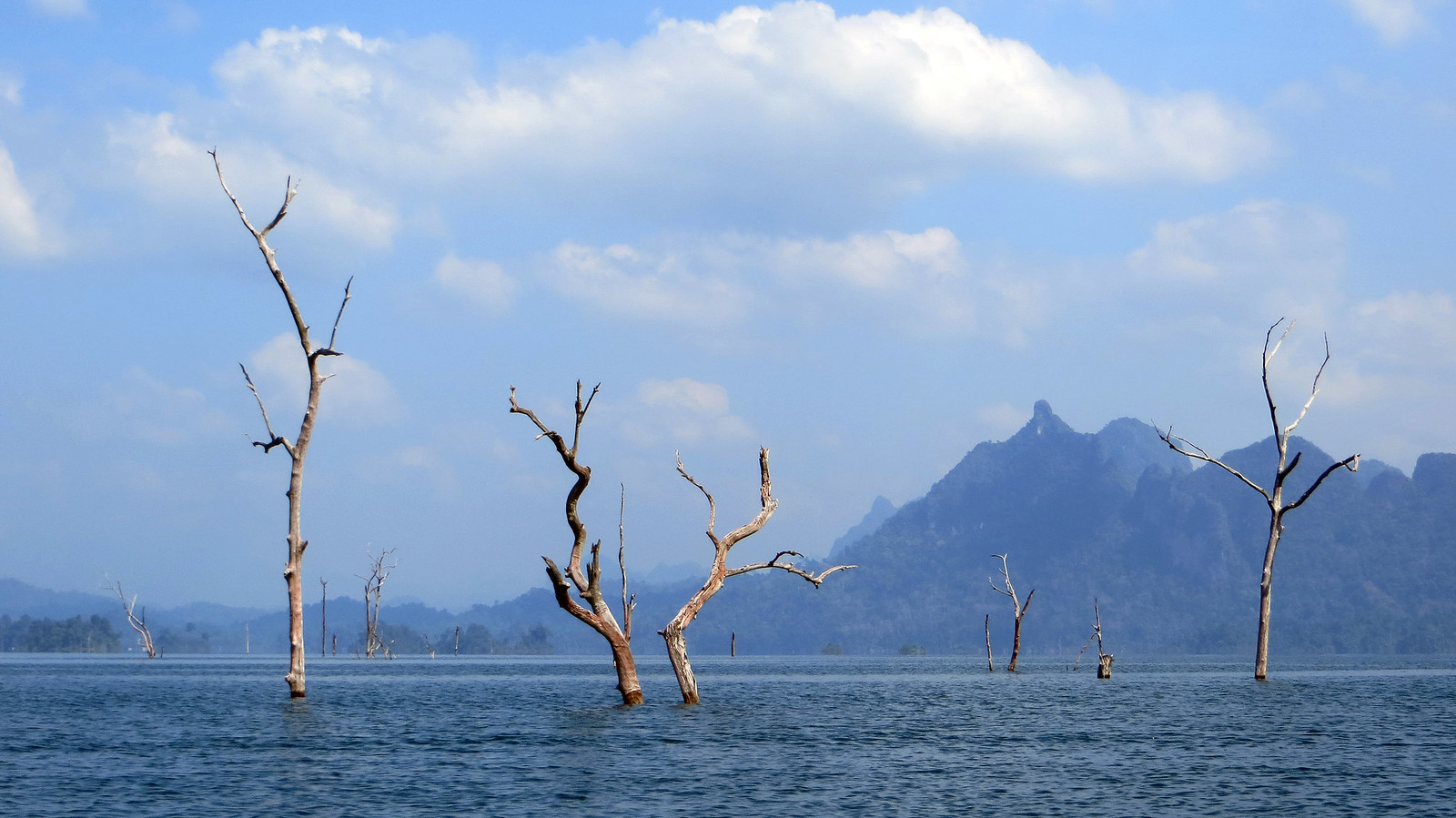 Come to the dark side of travel

Acknowledging and embracing the dark side of traveling makes traveling a bit easier. I travel because I seek to experience something different from the comforts of my home. I travel to challenge myself, to meet new people, to learn about other cultures. I wouldn’t have it any other way.

Have you experienced the dark side of traveling?